We’ve heard about the pristine white sands and those with rare jet-black shores. But do you know that beaches also come in a rainbow of colors?  It’s amazing how the world’s intersections of land and water can create something as magnificent as these unforgettable sights. Where do you want to go first?

There are only four green beaches around the world—all of which have different shades—but the Papakolea Beach has one of highest olivine content, a semi-precious stone which causes the striking olive-like color. Swimming is allowed but waves can be strong particularly in the southern coast. If you’re just in for the view, you can take a rugged three-mile hike along the southern most point in the U.S.A to take a glimpse. (The other 3 green beaches are Talofofo Beach on Guam, Punta Cormorant on Floreana Island in the Galapagos Islands, and Hornindalsvatnet in Norway.)

Also called the Kokkini Beach, its pebbly red sand is complemented with a stunning contrast of crystal-blue Mediterranean waters. The color is caused by black and red lava rocks from the ancient volcanic activity that essentially shaped Santorini in 1450 B.C. The backdrop is also stunning as it is surrounded with giant red cliffs. Other must-see site near the area is the archaeological place called Akroriti which is only five minutes away.

One of the most popular destinations in the Caribbean is home to the world’s most pristine pink sand beaches—a three-mile stretch of sand which transforms from a pale rose blush by day, to a vibrant pink during sunset. The color comes from tiny marine animals with bright pink and red shells known as Foraminifera. Once washed up on shore, they crash and later mix with the white sand.

A unique mixture of orange limestone together with volcanic deposits and crushed shells made the color of the sand a nice shade of honey.  The clear water as well as the sand dunes also created a mesmerizing effect. The place is a popular spot for diving, surfing and windsurfing.

While the sand isn’t entirely purple, there are patches of rusty violet and deep-purple that you can see. The color is due to large deposits of manganese garnet which came from nearby hills. Surrounding cliffs and grassy meadows make the area even more scenic. Pfeiffer Beach is located just an hour south of Monterey. 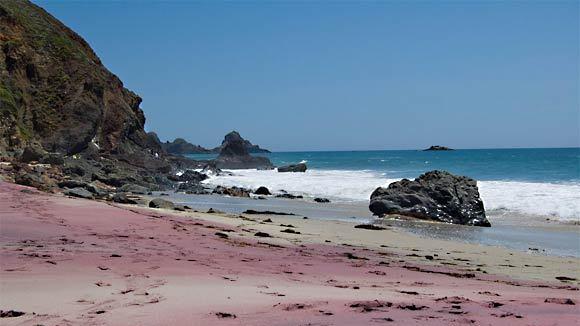 Just a three-hour drive north of Brisbane is this beautiful beach that has 74 different hues. Most of the colors are from the rich content of minerals in the sand but according to a legend, the colorful sand is a result of a rainbow spirit falling from a cliff after losing a battle over a beautiful woman.

Got more colorful beaches in mind? Post them in the comments!

Camping Hits: The Most Accessible Secluded Beaches in the Philippines
4 of the Best Airbnb Beach Houses in the World
Exploring the Lesser Known Spots of Bagasbas Beach, Camarines Norte
Philippine White-Sand Beaches You Should Check Out