If you’re not a fan of museums – of contemporary arts or centuries-old portraits – this place might just convince you to visit one.

Welcome to the museum that displays the detritus of people’s failed relationships. “Some relationships end—with lovers, with loved ones, with dreams and with cities,” states its website, Brokenships.la.

“If you’ve wished to unburden the emotional load by erasing everything that reminds you of that painful experience by throwing it all away—don’t. Give it to us.”

That’s right. YOU can donate items.

For $18, visitors can check out objects that are anonymously submitted. It varies from text messages to more intimate items like half-empty bottles of cologne, clothing, an iron used to iron a groom’s suit before a wedding, and a pair of silicone implants.

(This one is from a woman who had it removed after the guy who convinced her to get them dumped her.)

There’s also a dinosaur piñata with a description: “This is the first birthday present my ex-boyfriend gave me. It’s honestly one of the best gifts I’ve ever received.

“I’ve tried to throw this away multiple times, but it looks so sad sitting next to the trash. I hope this is the best home I can give it.” 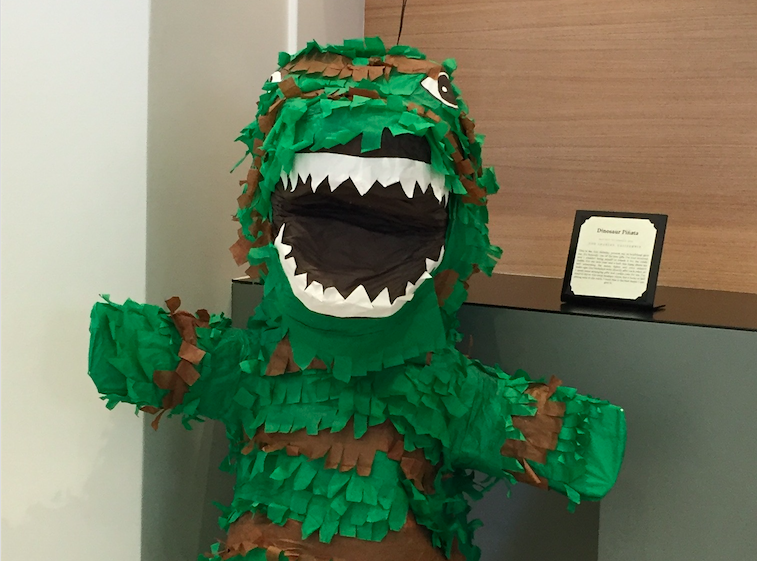 Every item in this museum has a sentimental value and comes with stories that are either funny, strange, or just downright heart-wrenching.

About 100 objects will be displayed for six months before new ones are showcased. 70 percent are from the permanent collection in Zagreb, Croatia where the museum was founded 10 years ago until art collector John B Quinn discovered it and decided to bring the concept to L.A.

The museum also has a confessional where visitors can describe their failed relationships in detail. But if you think it’s only for the lonely hearts’ club, you’re wrong.

The Assistant Director Amanda Vandenberg said, “I love watching people who go through the museum in pairs. I feel as if, as they read the stories, they get closer and closer together. It’s like they’re presenting a united front, saying: ‘This isn’t going to be us. We’re going to beat the odds.’”

Here are some of the things you can view in the Museum of Broken Relationships:

“He gave it reluctantly, together with the bits of my heart he still held.”

“Originally I aimed to achieve 101 shots which would mean: You are my one & only love.”

“After seven years together, five of them married, my husband told me that he felt stuck and that he “probably” didn’t love me anymore.”

“I spent an entire summer making this birthday present and he left it in my car.”

“He cheated and left long before it was finished and shipped to me.”

Also read about: There’s Going to be a Theme Park Completely Dedicated to Wine