The Philippines is the home of various animals – Luzon alone has the highest concentration of endemic mammals in the world. From flying lemurs to tiny big-eyed tarsiers, the archipelago’s unique animals contribute to attracting millions of tourists each year. While these animals would make you want to pose beside them, this giant bat would have you thinking that maybe vampires do really exist.

No, it’s not Batman or Dracula in their animal forms – it’s just a giant golden-crowned flying fox. This photo of the gigantic mammal recently went viral mainly for its size.

Also known as the golden-capped fruit bat, the gigantic flying fox is one of the largest bat species in the world. It boasts of beautiful golden fur and a face that resembles a fox, thus its name.  Don’t be worried though, these bats are totally harmless despite their ability to grow into the size of a human.

But here’s an important clarification: it’s their wingspan — not their height — that makes them gigantic. It measures between 4.9 to 5.6 feet wide.

In fact, their actual bodies are small and they only weigh up to 1.40 kilograms. But this weight makes them one of the heaviest bats in the world! Don’t be scared though, they won’t eat you. These golden-furred bats’ diet is frugivorous, which means they mainly feed on fruits, specifically figs, and some leaves.

The giant golden-crowned flying fox can only be found in the Philippines. The species has been found in Bohol, Boracay, Cebu, Leyte, Luzon, Mindanao, Mindoro, Negros, and Polillo. It was formerly found in Panay, but the population there is now locally extinct. 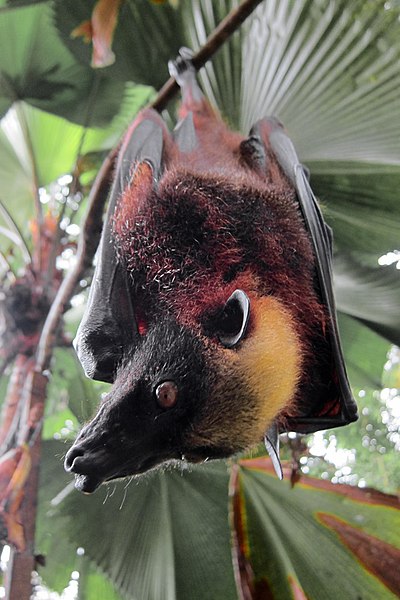 Unfortunately, these gigantic bats have been listed by the International Union for Conservation of Nature (IUCN) as endangered since 2016. Its population has declined by more than 50% between 1986 and 2016, with hunting as its main culprit. They’re being illegally hunted for their meat with as much as 30 bats killed by poachers. Deforestation has also affected their population and they’ve already disappeared in different islands in the country like Cebu.

In 2013, the giant golden-crowned flying fox has been included in the Bat Conservation International’s list of priority species for conservation worldwide.

What would you do if you see this creature casually hanging upside down in your yard?