We’ve all heard of the beautiful white sand of Boracay and the cool climate and spectacular views of Baguio and the Mountain Province. But if you’re on the lookout for spectacular local destinations that are off the beaten track or avoiding the usual tourist crowd, look no further. Here’s a list of remote Philippine destinations you definitely have to put on your bucket list.

The trip to Bugsuk Island in Balabac, Palawan involves a flight to Puerto Princesa, a six-hour bus to Rio Tuba, and a slightly harrowing two-hour boat ride to the island itself. But boy, is it worth it.

Tourists are welcome but rare in the island, and those who do visit may pitch tents in designated areas near the island’s shores after coordinating with the local government.

The fact that there are very little chances of seeing other tourists in Bugsuk Island gives you a chance to appreciate the beauty of the island and interact with locals in the small fishing village.  Fishermen are commonly seen hanging fresh seaweed on wooden poles or otherwise slicing and gutting fish on bamboo trays for drying. They also have plenty of fishbait in the form of wakwak, a beach worm that feeds on sand.

When cooked in vinegar, these are also considered a delicacy among the locals. While there, you can also visit the neighboring islands of the Balabac group of islands, especially the equally beautiful Onuk and Patawan islands.

Here are eight more obscure white sand beaches to visit in the Philippines.

Waterfalls are breathtaking natural bodies of water that flow over vertical drops in the course of rivers or streams, and are thus made up of freshwater. Except for this one. 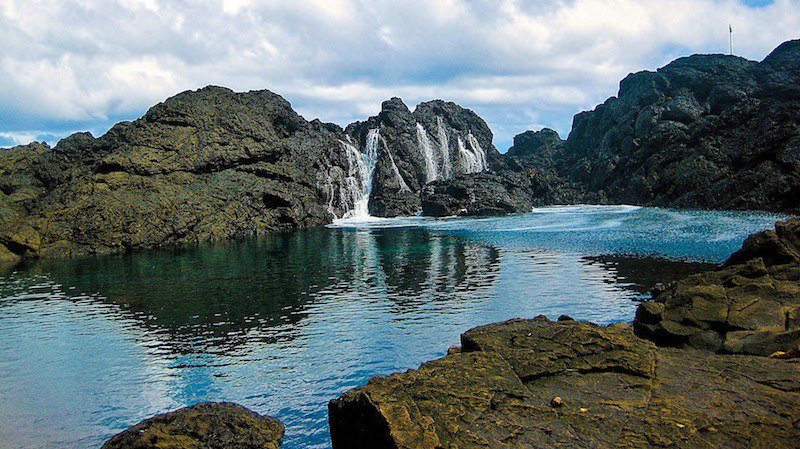 Okay, technically it’s not a waterfall, but it certainly looks like one.

In a rocky sanctuary in Cortes, Sugirago del Sur lies Laswitan Lagoon. Here, ferocious waves from the Pacific Ocean hound the black limestone outcroppings outside the lagoon. The waves are so strong the saltwater splashes over the tops of the rocks and flows onto the other side of the rocks, where tourists can witness the laswit create a cloud-like formation over the outcropping for two seconds before forming into a a faux waterfall pouring into the lagoon.

To get there, you need to take a flight to Surigao City and a southbound bus to Tandag. Go down in Cortes, which is around 4 hours away from the starting point. You can then ride the habal-habal, or the motorcycle, from the town proper to Laswitan and pay an entrance fee of PHP20.

The lagoon is being promoted by the local government as a tourist attraction but has largely flown under the radar over the past few years. The journey itself is a sight to behold as well, with scenic highways and patches of sea and sky fascinating the eye. It can also be slightly intimidating with its strong waves and large boulders.

It’s best to visit the lagoon during the amihan season, when the waves are strongest, between October and March.

To the untaught eye, the large cross off the coast of Catarman, Camiguin may look like an oddly placed religious marker in the middle of the sea.

But it’s actually the final resting place of thousands of local people.

In the 1870s, a volcanic fissure was formed after weeks of earthquakes in Camiguin.  This event marked the birth of Mount Vulcan, which continuously poured lava into the sea until it gained nearly 2,000 feet in height and, as a consequence, engulfed Catarman — and the cemetery with it — underwater.

Parts of the cemetery were still visible in low tide up until 1948, when Mount Vulcan erupted yet again, burying the cemetery and the surrounding areas by another 20 feet. A large cross was then built nearly four decades later to mark the final resting place of the island’s dearly departed.

Today, the island is composed of four young stratovolcanoes, some of which are still considered active. All that survived of the old Catarman to this day are a bell tower, a convent, and what remains of the ancient San Roque Church. 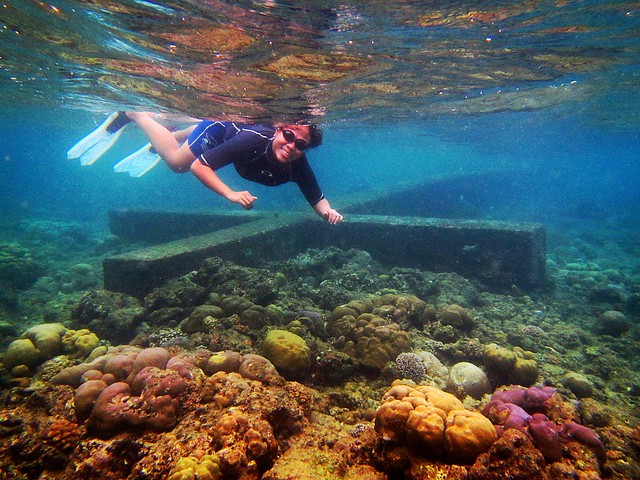 After decades since the last volcanic eruption, schools of fish and corals have now joined what remains of the sunken cemetery, which makes for a one-of-a-kind, if not eerie, snorkeling experience.

To get there, you have to take a flight to Cagayan de Oro City and a bus to Camiguin at the Agora Terminal. Cebu Pacific also offers flights from Cebu to Camiguin.

A majestic blue river half an hour away from Hinatuan, Surigao Del Sur, The Enchanted River is, in every sense of the word, enchanting.

There are shallow portions where tourists usually swim, as the crystal clear waters allow one to see the riverbed pretty clearly. The dark blue area marks the rivers’ deepest, believed to be at least 80 feet deep

No one knows exactly where the river’s water comes from and what lies inside its underground caves, although people have died in the attempt to learn. What we do know is that the waters are a pristine blue, believed by locals to be maintained and protected by the supernatural.

The locals tell of fish that simply can not be caught by any means known to man. They also share stories about how it was the fairies that added the breathtaking shades of blue, and of irreverent outsiders who suffer from “unexplainable” body pains after swimming.

At exactly 12 noon everyday, the caretaker rings the bell to signal visitors to get out of the water. The Hinatuan Hymn is then played, as the caretaker proceeds to feed schools of fish gathering near the mouth of the river.

The area has recently been developed to include cottages, picnic tables, chairs, tents, and food stalls. Lifeguards are also always on duty, with no swimming allowed past 5 pm.

As beautiful as it is isolated, the Batanes group of islands is a sight to behold. Cut off from the rest of the Philippines by oceans and strong winds, the ten tiny islands are a picturesque formation of rocky cliffs beset by strong waves, rolling hills, and beautiful old stone houses.

Only three of the Batanes islands are inhabited, namely, Batan, Sabtang, and Itbayat. Tours are divided into the North Batan Tour, South Batan Tour, Sabtang Tour, and Itbayat Tour. You can also rent a car so you could have more control of your time, especially if you want to pause in between tour stops — which you inevitably will, given that any angle given by the island is sure to be lovely, whether it features the coastline, one of the islands’ many lighthouses, emerald hills, or charming Spanish-era houses.

We highly recommend visiting Valugan Beach in Basco, a natural masterpiece formed from spewings of Mt. Iraya in the 15th century. The waves here are strong, the ocean slapping the rocks ferociously for decades to create their polished texture.

The Diura Fishing Village in Mahatao is also a nice place to visit. A lot of the beaches in Batanes are generally unsuitable for swimming because of the strong waves or, in this case, its reef beach. But there is a hidden spring, which the locals call Rakuh-a-idi Spring, or the Diura Spring of Youth. It flows from the mountains and straight to Diura Beach.

If you have a few extra hours to kill, it might also be good to rent a bike and explore Basco and surrounding hillsides. Make sure you have the stamina for this, though, as the hills can get a bit tiring under the hot sun. Nonetheless, the bike ride is sure to be rewarding. 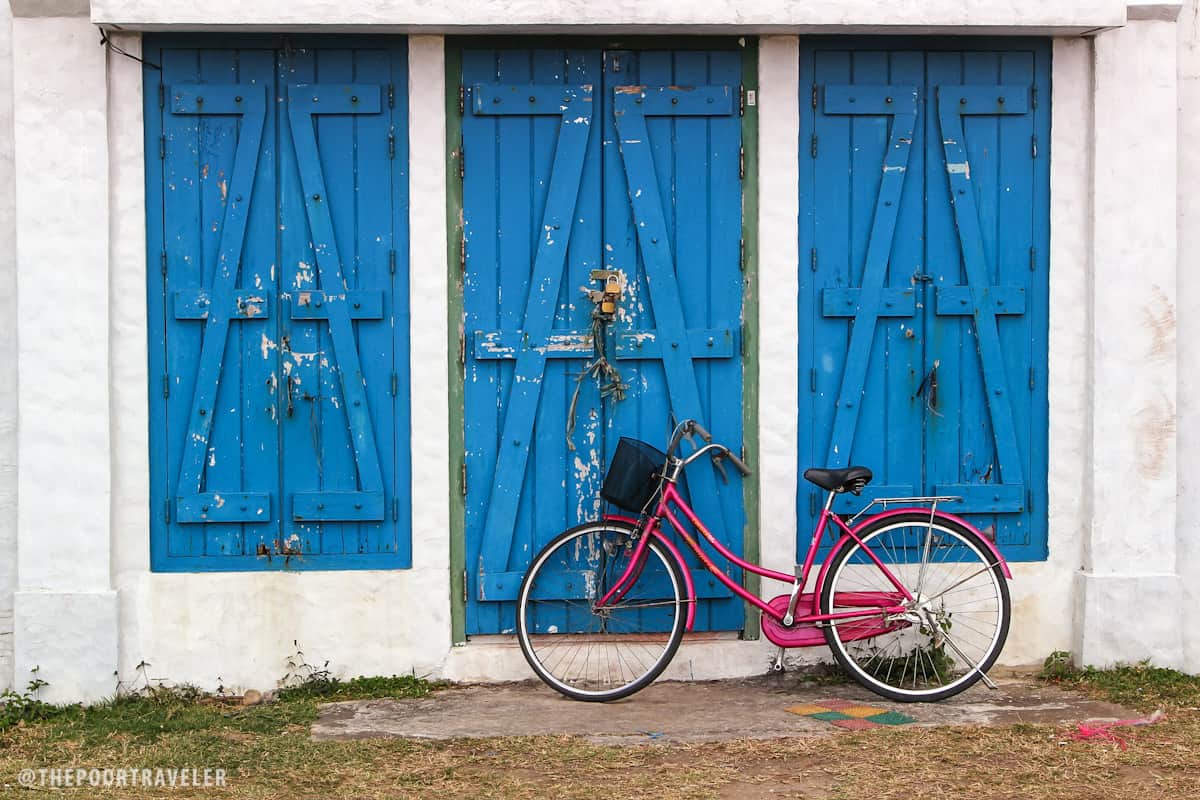